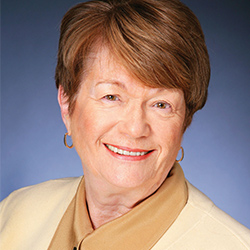 Time, talent, treasure – the trifecta of philanthropy. Joan Francolini gave generously of all three, and in the process transformed her family, her community, and her Alma Mater.

Joan’s father was a senior civil servant, and she grew up with the idea of public service as a high calling. According to one family story, as a child Joan gave a bike to the child of a visiting diplomat when she learned that he couldn’t afford to buy one.

Her mother died during her first year as a student at Brescia University College. The small institution became a second home, the Ursuline Sisters, her mentors, and her fellow students, family.

Joan met her future husband, Geno Francolini when they both served on the Students Council at Western University. They married shortly after graduation and had six children.

Like many women of her generation, Joan left paid employment while her family was growing up. But she soon got involved in volunteering at local hospitals, the church auxiliary, and other organizations. As her natural leadership abilities were recognized, she was recruited to leadership positions in many organizations, including various hospital boards and foundations, London Community Foundation, the YMCA, and United Way. Says son Tony, “It was a way to ensure that her abilities didn’t go to waste, while giving back to her community.” 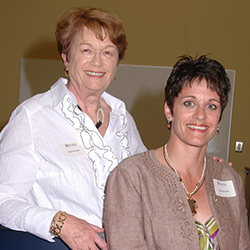 In 1992, with her children launched, she became the first executive director of the Lawson Foundation, serving for nine years. In that role she was a staunch supporter of the fledgling Let’s Talk Science program, now an influential national organization.

Alongside her other activities, Joan always maintained her connection with Brescia. She and her friends regularly returned for Homecoming and she encouraged daughter Sara, also an alumna, to get involved. She was thrilled to see the University develop a focus on preparing women for leadership, and always championed its voice within the larger university. “My mother believed in the power and knowledge of women,” says Sara.

Eventually Joan developed the vision for the Francolini Leadership Experience and worked with Tony and Sara to shape it. The innovative program provides students with paid internships in local companies and organizations, while building links between Brescia and the partner organizations. “My mother wanted to help students and she wanted to develop a stronger connection between Brescia and the local community,” says Tony. “This was her way to do both.” Sara agrees, adding, “The program is really a legacy based on all the things she valued most.”

Joan received an honorary doctorate from Western University in 2012 and was named Brescia’s first chancellor in 2013. She used her Convocation address to encourage graduates to give back to their communities. “Service means involving yourselves and giving back to the communities in which you live and work,” she told the graduating class. “All the work that went into earning your degrees will provide you with the wisdom and belief in yourselves to make good decisions, think creatively, and make a difference in this world.”