The Brescia University College Alumnae Association takes great pride in recognizing our bold alumnae for their outstanding career achievements and tremendous contributions to their communities. This recognition is demonstrated through The Carmelle Murphy Alumnae Award of Distinction, Sister Mary Lou McKenzie Young Alumnae Award of Merit and Alumnae Trailblazers, which are all acknowledged and nominated by fellow alumnae, staff, faculty and community members.

Each year, at Homecoming, we highlight the accomplishments of two bold alumnae celebrating a reunion at Brescia. Do you know a fellow alumna (that graduated in a year ending in a 1 or 6) that is deserving of an award? 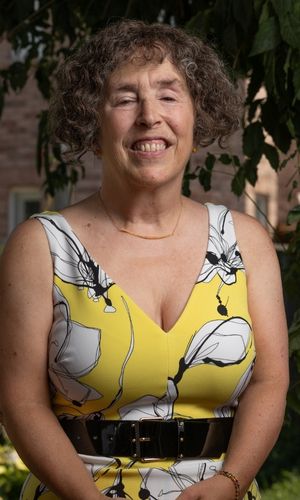 The legal sector has typically been a male-dominated industry, an issue that Penny Rintoul ’87 has been working hard to rectify since her time at Brescia. While there are still many barriers for women in the workforce, Rintoul is confident that Brescia’s focus on women’s education is making a difference, and the opportunities granted as a result of a women’s only education are immeasurable.

In 1984, Penny began her undergraduate degree at Brescia in what is now referred to as Business Management & Organizational Studies (BMOS), and later continued her studies at Western for her combined Bachelor of Laws (LL.B.) and Master of Business Administration (M.B.A.) degrees. Penny has been practicing law for almost 30 years (celebrating the 30th anniversary of her call to the Bar in February 2023), and currently practices at RZCD Law Firm LLP in Mississauga, where she does both general corporate and commercial law work as well as wills, estates and trusts. Rintoul’s interest in the legal field began when she was a child, when she would pretend to draft official laws against her parents’ rules. According to Penny, an aspect of the legal field she enjoys the most is “advocating on behalf of your clients.” Penny recounts the times she’s advocated for her clients as the only woman in the room: “Thankfully, my reaction to that was, okay, fine. I'm not going to change how I do things: I'm the lawyer in the room and that deserves respect.”

Rintoul first became engaged as an alumna on the encouragement of fellow alumna Nadia Martin’55. Rintoul says, “I believed in Brescia and its mission. So, I accepted the invitation, and I've been involved ever since.” Through her role on Brescia’s LEAD WITH US Campaign Cabinet, she looks forward to seeing the valuable work that is done through the Centre for Leadership come to fruition.

In addition to her successful career and volunteer work with Brescia, Penny is an amateur photographer and board member of her camera club. She enjoys taking photos of flowers as well as architecture, particularly on her travels. The achievements she is most proud of are her now adult children, both of whom she and her husband adopted from China as infants, and their work ethic and sense of gratitude for what they have, which are such valuable traits in today’s world.

Penny affirms that Brescia is a well-kept secret that encourages its students to pursue leadership roles, and she remains committed to supporting Brescia in its work to foster the development of our next generation of women leaders. 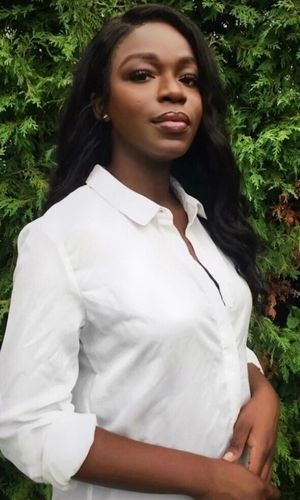 When asked what the biggest lessons she learned at Brescia were, Joëlle Kabisoso Kapinga ’17 is proud to say, "… the ability to be able to take control over my own journey and create my own path." She believes that Brescia does a remarkable job in equipping women and girls to become leaders and to not be afraid to be bold, to find places that encourage autonomy and personal leadership, and to take up space. After graduating with a Bachelor of Arts in Human Development and Family Studies, Kapinga went on to receive a certificate from York University in Family Mediation. Joëlle worked for Legal Aid Ontario as a client specialist and now serves as a Campaign Officer at Development and Peace – Caritas Canada.

At the age of 17, Kapinga suffered a traumatic experience and has since worked hard to help address violence against Black girls and women in Canada. In 2018, after her participation with the Black Youth Action Plan , she started her own non-profit called Sisters in Sync as a response to the needs of women and girls across Canada for supportive spaces to further their journey of self-discovery, healing, and resilience. Kapinga says the name Sisters in Sync comes "from the idea that we are all in sync as women; we all go through the same thing at some point in our lives, and it’s important for us to be there for each other." Kapinga wants people to know that Sisters in Sync is a small but powerful group of youth that are working hard to make sure people are aware of all the ways trauma can impact their growth and wellbeing. Sisters in Sync has created a program where women are motivated and supported. Their motto, "we got you, sis," reinforces their values of solidarity and support for marginalized women.

As a result of her work as a community leader, Kapinga has received numerous awards including: 2022 Prix Releve ON Jeune Leader, 2021 Hamilton Black History Council Community Service Award, 2021 Equal Chance Legacy Builder Award, 2021 YWCA Young Trailblazer Award, 2020 Afropolitan Leadership Award, 2020 CIBWE Top 100 Black Women to Watch in Canada. The achievement she is most proud of, however, is the 2022 L'Oréal Paris Women of Worth Recipient because “to know that I was considered to be among one of those amazing women is such an honour, and it's also knowing the key part is that people are championing for you.”

In the future, Kapinga hopes that Sisters in Sync becomes an international organization focused mainly on the Global South. Her focus in the next five to ten years is to have a Sisters in Sync team based in the Democratic Republic of Congo, her country of origin. Kapinga says, "I want to be able to show the young girls from my village that their circumstances do not define their future and that, through the support that we can offer them, we want to be able to be on their journey with them and provide avenues for them       to see the endless possibilities that they have in their cities or in their villages. I want to highlight the beauty of the different countries and champion the need for safer resources for women who experience violence. "