Explore our visual tour of the stained glass windows of the Holy Family Chapel at Brescia University College. These windows showcase not only our faith as a University, but the importance of the Ursulines who continue to guide our students, faculty and staff leading with wisdom, justice and compassion. 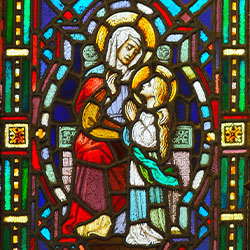 The windows in the Lady Chapel are of Munich glass, made by Gustavo Van Treek Studios, Munich, in association with Conrad Schmitt Studios, Milwaukee, Wisconsin. They depict Mary with her mother, St. Anne, and Mary being presented in the Temple by her father, St. Joachim.

The rest of the windows, made of painted glass, were created by Robert McCausland Ltd. Of Toronto.

The Christ the King
OpenClose 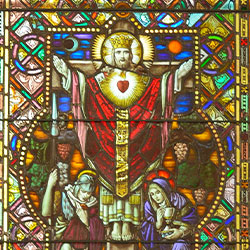 The Christ the King window in the sanctuary is a tribute to Bishop M.F. Fallon and the priests who were on the faculty at the time of Brescia’s opening. They served as Chaplains for the College for many years and several taught at Brescia. The upper part of the window depicts Christ as victim, priest and king, along with St. Peter and Bishop Fallon’s two name saints, Michael and Francis. He is portrayed in the lower panel along with the seminary faculty, who are represented by their patron saints. 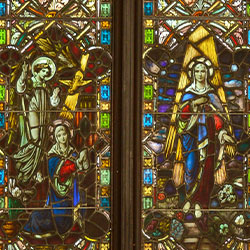 This window has two large images of Mary, one of the Annunciation by the angel Gabriel, and the other depicting Mary’s Assumption into heaven. The lower left small window portrays Mary with her mother, Anne. The upper left small panel celebrates Mary with her cousin, Elizabeth, honouring the event referred to as the Visitation. The upper right depicts the birth of Jesus, and the lower right, his presentation in the Temple. 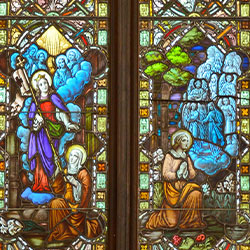 This might be the window most often referred to as we tell the story of the Ursulines of Chatham and the founding of Brescia University College. That story begins with the birth of Angela Merici in Desenzano, Italy in 1474.

One of the large panels is an imaginative depiction of St. Angela and St. Ursula.  At the time that Angela founded the Company, there was a popular devotion to St. Ursula as a patron of youth. Angela chose to name the small band of women after St. Ursula.

The other central image is of St. Angela in what is called the vision of Brudazzo. When Angela was a young girl, she had a religious experience of some personal importance in which she came to understand that she was to do “something” with women. This was not in any way clear but stayed with her all of her life.

Angela belonged to the Third Order Franciscans, a lay organization which responded to the many needs of a society ravaged by war.  She cared for widows, counselled people, served the ill and in general, addressed whatever needed to be done.

In this period, women had two options: to be married or to enter the cloister. Angela did not feel called to either and in effect, developed a third alternative for women. Gradually, other women were also attracted to her way of being in the world and by 1535, Angela and 28 women formed the Company of St. Ursula. These women continued to live with their families or at their place of employment, and came together for prayer and mutual support. They formalized this new beginning by attending Mass together and signing their names in a book on the feast of St. Catherine of Alexandria, November 25, 1535 in the city of Brescia, Italy.

This way of life continued for some time. However, the reforms instituted by Charles Borromeo, Bishop of Milan (1564-1584), imposed the cloister on the Company. No longer able to move freely among the people, the Ursulines found a new way to serve: inviting young girls inside the cloister walls to be educated. Thus, began the reputation of the Ursulines as educators.

The smaller upper panels depict Angela as a woman of prayer and a counsellor, equally comfortable with the poor, ill and the people of high rank in Church or state. The lower right panel features three people important in Ursuline history: St. Catherine of Alexandria, on whose feast (November 25, 1535) the community was founded, St. Augustine, whose rule was adopted by the Ursulines, and St. Charles Borromeo, the Bishop responsible for the cloistered stage of Ursuline life.

As a small point of interest, the cornerstone of the Chapel was dedicated on the Feast of St. Catherine of Alexandria, November 25th, 1925. 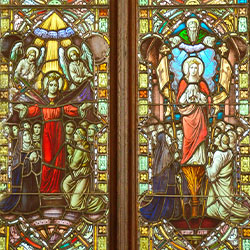 The story of St. Ursula is largely legendary. According to one version, Ursula was a British princess who was promised in marriage by her father. She requested some time to go on a pilgrimage with her friends before the marriage. While enroute, she and her companions (variously numbered as 11 or 11,000) were martyred by the Huns. The images of both large and small panels build on this legend.

You will remember that in Angela’s time there was devotion to St. Ursula as a patron of youth. Angela chose to name the community the Company of St. Ursula.

Often, in art, Ursula is depicted with a boat, reminiscent of her fateful pilgrimage. Hildegarde of Bingen is credited with creating a beautiful musical piece dedicated to St. Ursula. While her story may be legendary, St. Ursula has had influence. Ursulines continue to celebrate her feast day on October 21st.

Martyrs and the New World
OpenClose 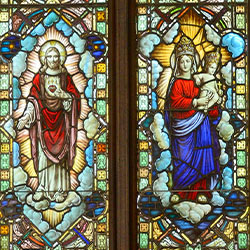 This devotion stems from the Ursulines of New Orleans. During the Great Fire of New Orleans (1788),  the Ursulines placed a statue of Mary in the window facing the fire and prayed for her protection. The fire stopped just before it got to the monastery. There are other miracles which the people credit to Mary under this title of “Quick help.” Even today, the faithful in New Orleans pray to Our Lady of Prompt Succour for protection during hurricane season.

This window might be called the “history window.” The upper small panels depict the Ursuline Martyrs of Orange and Valenciennes in France. During the French Revolution most religious communities were suppressed and many members were murdered, often by guillotine.

The lower left panel celebrates the arrival of Marie of the Incarnation, the first Ursuline to arrive at Quebec in 1639. Marie was a prodigious letter writer and much of the early days of Canada (1639-1671) was documented in her letters. The school she began still operates today.

The lower right panel honours the arrival of the Ursulines in New Orleans in 1727. They established a school for girls, which is the oldest educational institution in the United States. They also established an infirmary and hospital.

The Ursulines were prominent in the development education for young women in both Canada and the United States. Brescia University College stands firmly on the shoulders of a rich history of women’s education. 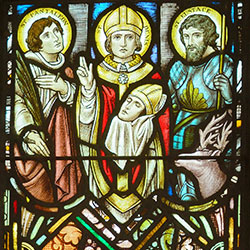 In another time, we might have skipped the last window as it is partially obscured by the choir loft. In this pandemic time, it carries a particular significance.

The 14 Holy Helpers are a group of saints called upon against various maladies and diseases. Devotion to the fourteen holy helpers developed as a result of the Plague (1346-1353). They are St. Agathius, St. Barbara,*St.Blaise, St. Catherine of Alexandria, St. Christopher, St. Cyriacus, *St.Denis, *St Erasmus, *St. Eustace, St.George, St. Giles, *St. Margaret of Antioch, *St. Pantaloon and St. Vitus. The saints marked with an asterisk are depicted in the section of window presented.

Our thanks to photographer Victor Aziz.